Not Much Of A Home Run Derby!

When Billy Butler & Mike Avelis hit their 7th HR in early August, I thought it would be fun to track their HR's.

I thought wrong.
Oh, the "race" was tight and both banged their last HR's out in the same game of the last series. But their power surge was more like a flicker.
For what it's worth... 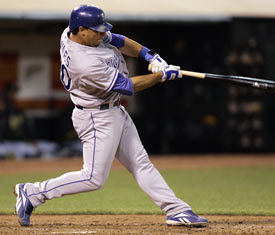 one more than Mike who hit 10.
As a team, the Royals ranked way down in the league with total Home Runs... however... 7 players ended the season in double digits.
Something to build on... that's my spin!