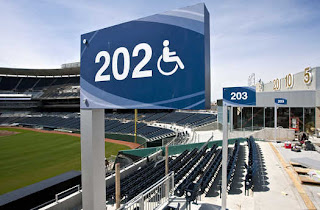 Forty years ago, when I acquired my disability, there were NO equal rights laws for people with disabilities. I was young, skinny & used a manual wheelchair and ready willing & able to be lifted, bounced & banged up steps, curbs & steep inclines.

Now, I don’t do steps… nor do I “go in the back door” at restaurants (which needs to ramped so they can get their kegs of beer in). So when we (Jackson County residents) passed the bonds to renovate The K, I was excited to see how they would include integrated seating in the retro-fit and new seating configurations.

I sent several emails to Royals inquiring about accessible seating and their only reply was to send me a Seating & Pricing link, which I already knew how to navigate to. That bothered me on two fronts. First of all, they didn’t directly answer my question, nor route me to someone who COULD. So, I was kind of worried that my issues weren’t being addressed.

My other problem has to do with the fact that I can’t order accessible tickets online… they always make me send an email that they may or may not respond to in a timely manner… but I’ll go deeper into this issue in another blog-post.

Anyway, I know and trust some of the people sited in the KC Star article and mostly just wish I had been involved in the process… jealousy is an ugly thing. (insert emotion)

So when I go to The K, I’ll know who to bitch to if I see accessibility issues.

Side note… this article includes proper terminology when referring to people with disabilities. It’s not that hard to get it right, but not done well on a consistent basis… kudos KC Star!
Posted by RLBLUE at 5:49 PM No comments:

The Buddha Gut will haveta check this one out on a hot day at The K!
Posted by RLBLUE at 1:54 PM No comments:

We’re getting General Admission back… Yeah! With all the high end seating additions at The K, I was glad to see some aimed at people like me. I could save up and go to a game or two at the higher priced seats, or go several times. I just need to remember to bring a plastic bag to cover joystick control box. If the wind is blowing just right (wrong?), I could see fans getting a little wet (On a fishing trip in WI a couple years ago, I sat out in the rain catching some nice small-mouth bass and the controller shorted out… this fat old man doesn’t like to have people push his chair around!). I don’t know how many people this area seats but “The first 100 fans arriving at these seats each game receive a special edition Royals cap made exclusively by DRI DUCK. The featured cap design will change for every homestand.”

The Bob Evans Bases Loaded 4-Pack sounds good, too. “Get four (4) View Level Infield tickets and $10 of loaded value per ticket for concessions and merchandise - over a $100 value - all for just $60!”


Ponson has ups and downs in debut

Sir Sid did well for 5 innings… then lost it. He seems to have been an OK pick-up. I wouldn’t mind seeing a starting rotation of Meche, Greinke, and Davies, with Hochevar & Ponson in the final two spots. Bannister can go to Omaha to find his consistency, like he did in ’07.


Aviles has big day for Royals

Looks like Aviles is heating up, now that he’s back from the WBC & getting consistent AB’s. We need a good offensive showing from him this year. It just concerns me a little to have both middle infielders being big O little D players (assuming Teabag wins 2B).

Miggy certainly made it clear enough late last year that he wasn’t happy being the number 2 catcher for the Royals. He got the lion’s share of the playing time behind the plate in September. I like the way Buck is hitting this spring. If Bryan Pena can pass through waivers at the end of ST… and… if both Olivo & Buck hit well in the first half of the season… maybe… we can turn one of these guys into some good prospects near the trading dead-line. That’s a lot of if’s… so we’ll see.
Posted by RLBLUE at 9:41 PM No comments:

... is that there are some ML capable players in Spring Training who will NOT make the club. If that is true, maybe the Royals WILL be a contender this year. Wednesday (3/18/09), the club announced that they released Jimmy Gobble. OK, so last year he was horrible against right handed hitters... but what do you expect from a lefty specialist?

If he clears waivers... goes to Omaha & turns things around offensively, MAYBE he gets another shot in KC. I'm not holding my breath. Too bad... I like speed & D... not sure why I'm skeptical about Bloomer-boy.

Oh well, time to move on to other fun shtuff.
Posted by RLBLUE at 9:59 PM No comments: